The lineage and honors of the 36th Brigade, 49th Armored Division, can be traced back to the 36th Infantry Division, which was originally organized at Camp Bowie (Fort Worth), TX, on 18 July 1917, and which drew from units of the Texas and Oklahoma National Guard. After taking part in operations in France during World War I, the unit was reorganized into 2 separate units, an “all Texas” division, while its Oklahoma units sub-components joined to form part of the 45th Infantry Division.

The Division was mobilized on 25 November 1940, and placed on active duty station at Camp Bowie, before transferring overseas to North Africa and Italy. In the process, the 36th became the first American combat division to land in Europe. Taking part in combat operations in Italy and Southern France, the unit had accumulated seven campaign streamers, taken part in two assault landings and had 14 of its members receive the Medal of Honor. Upon its return home, the unit was reorganized as part of the Texas National Guard and was deactivated in 1968. With the reactivation of the 49th Armored Division, the 36th Brigade assumed the lineage and honors of the 36th Infantry Division. This famous WW2 infantry division patch is available in full color, woodland, and desert. 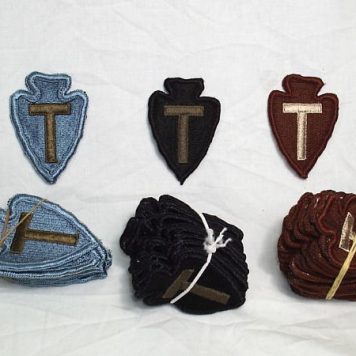