The M-1 helmet has been in military service since 1942. This particular model was issued between the late 1970’s and the early 1980’s. The army helmets are used and feature the original issue American made Steel Pot with original nylon clip-on chinstrap, the original issue American made ballistic liner with the later snap-in, removeable suspension system. Also the original transitional late 70’s issue camouflage pattern cover that looks similar to the ERDL cover from vietnam. But they are the transitional camo that was issued before 1983 when the true Woodland pattern was developed and issue. Finally the elastic helmet cover band to hold the camo cover on tight. All used in good condition. The only piece that is missing is the nape strap. 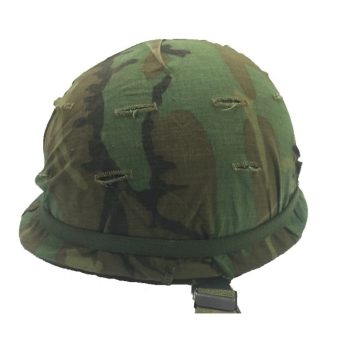