The 49th Armored Division, Texas National Guard, assumed command and control of Multinational Division-Northd Task Force Eagle March 7 in Bosnia and Herzegovina. This unit traces its lineage back to the 1917 when it was organized as the Texas National Guard at Houston as Headquarters, 1st Brigade and later earned combat campaign credit at Meuse-Argonne during WWI. The transfer of authority is especially significant in that it is the first time a National Guard division headquarters has assumed the command and control of MND-N and Task Force Eagle since their inception in December 1995. Patch is original GI. Available in full color dress or subdued for the BDU. 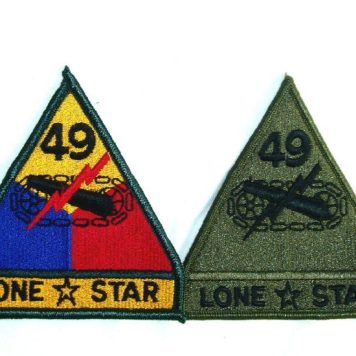