The 1st Aviation Brigade commands and controls two battalions, each with a unique mission. The brigade is normally staffed by about 1,800 permanent party soldiers to support more than 1,900 military students. Among its many command responsibilities, logistical support, and administrative duties, the brigade has a primary mission to train future Aviation leaders in warfighting by using constructive simulation and classroom instruction. Equally important are the advanced individual training skills taught to entry-level soldiers in the Air Traffic Control, Aviation Operations Specialist, and UH-1 and OH-58 Maintainers Courses. The 1st Aviation Brigade was organized 1 March 1966 as the U.S. Army Aviation Brigade (Provisional). The Brigade became part of the Army’s official force structure on 25 May 1966 when LTG Engler, Deputy Commanding General, USARV, formally presented the 1st Aviation Brigade Colors to then BG George P. Seneff, Jr., the first brigade commander. The 1st Aviation Brigade was initially composed of the 14th and 17th Combat Aviation Groups, nine Combat Aviation Battalions, and 45 companies with over 1,000 organic aircraft and 15,000 officers and men. New Army aircraft arrived in Vietnam in 1967. In June 1967, the CH-54 “Sky Crane” Detachment was assigned to the 147th Aviation Support Helicopter Company and provided Army Aviation with a heavy lift capability. The AH-1 “Cobra” arrived in August 1967 to enhance the effectiveness of the Brigade’s combat support firepower. The OH-6 “Cayuse” observation helicopter arrived in October 1967 with deployment of the 1st Air Cavalry Division. Fixed wing aircraft such as the O-1 “Birddog” observation aircraft, the U-21 “Ute” passenger transport aircraft, and the OV-1 “Mohawk” aerial surveillance aircraft, as well as others, were aviation stalwarts at this time also. During June 1970, the 1st Aviation Brigade reached its largest organization. At this time it was composed of four Combat Aviation Groups, 16 Combat Aviation Battalions, and 83 companies with over 4,000 aircraft and 27,000 personnel. A glance at a month’s operational statistics for the Brigade’s unit provides an insight into the role of Army Aviation in Vietnam. A typical month in 1970 revealed over 605,000 passengers transported together with over 60,000 tons of cargo hauled in support of Allied Forces. Brigade aircraft were airborne over 155,000 hours during the month. On the signing of the cease-fire on 28 January 1973, the Brigade strength had been reduced to 5,000 personnel and 420 aircraft in four Combat Aviation Groups. The 11th Combat Aviation group was redeployed to the United States on 19 March 1973 for retention on the Active Army Roll. The 12th Combat Aviation Group was redeployed to Fort Bragg, North Carolina, on March 1973 for retention on the Active Army Roll. The 17th and 164th Combat Aviation Groups were redeployed to Oakland Army Terminal, CA, for inactivation. The 1st Aviation Brigade was redeployed to Fort Rucker, AL, on 24 March 1973 for retention on the Active Army Roll. 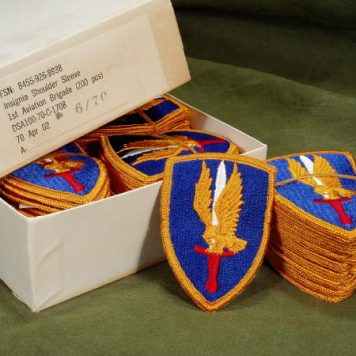